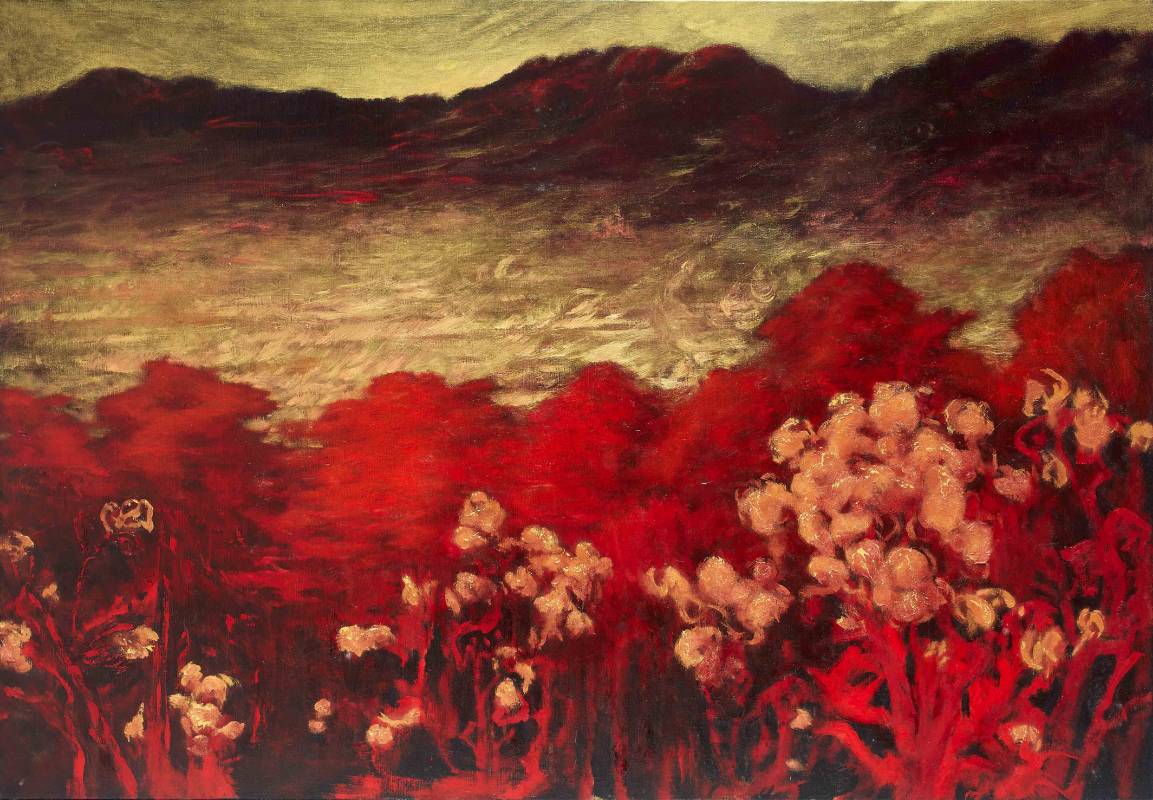 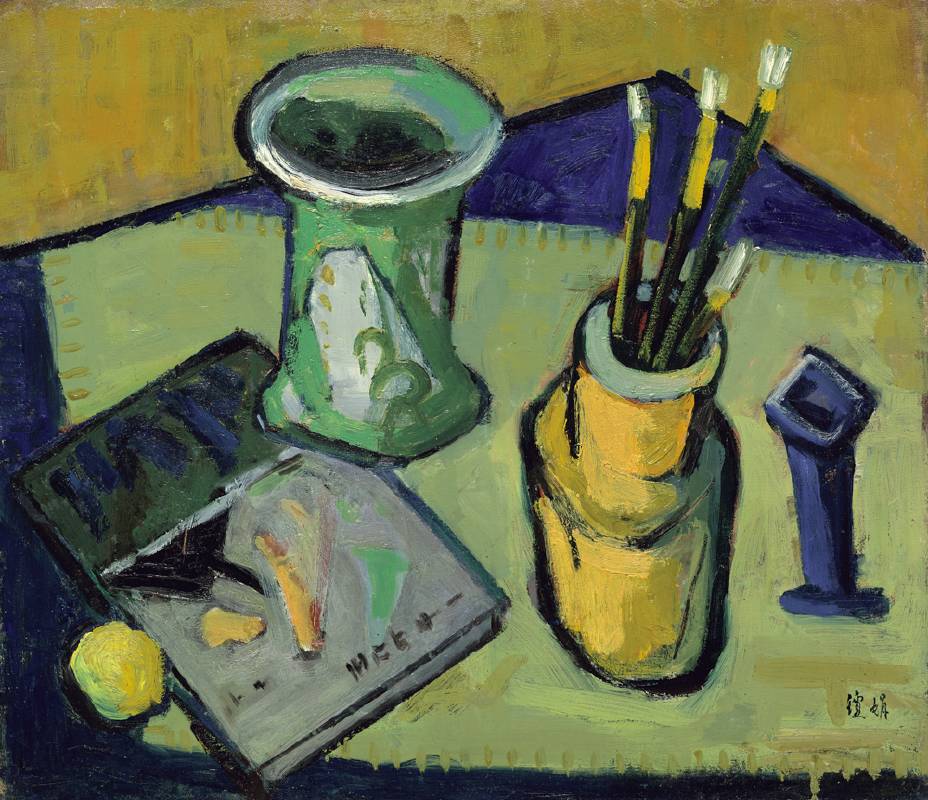 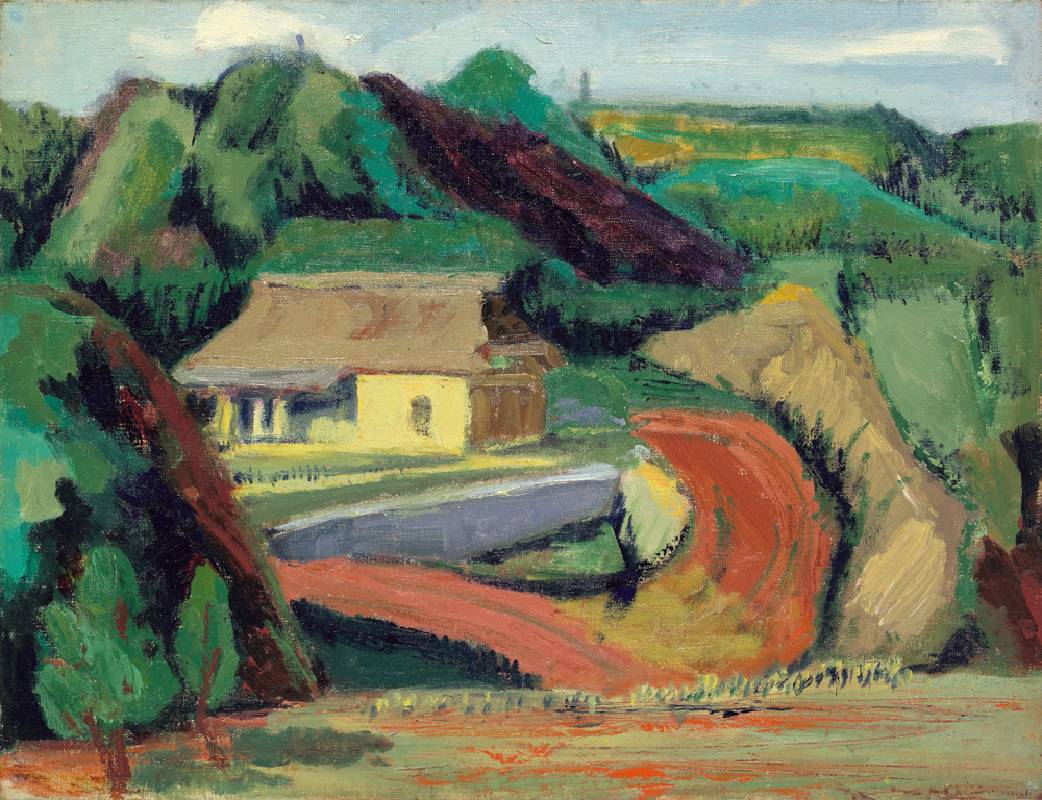 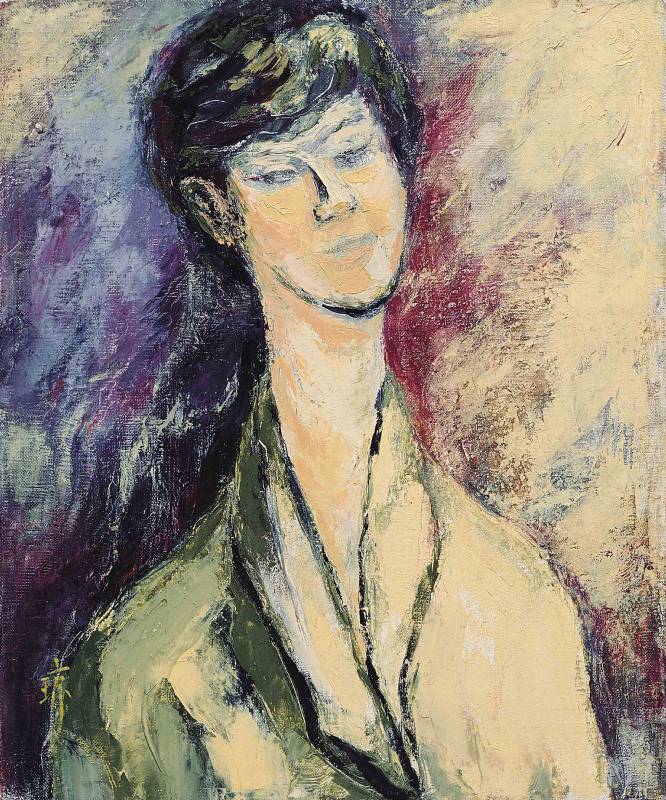 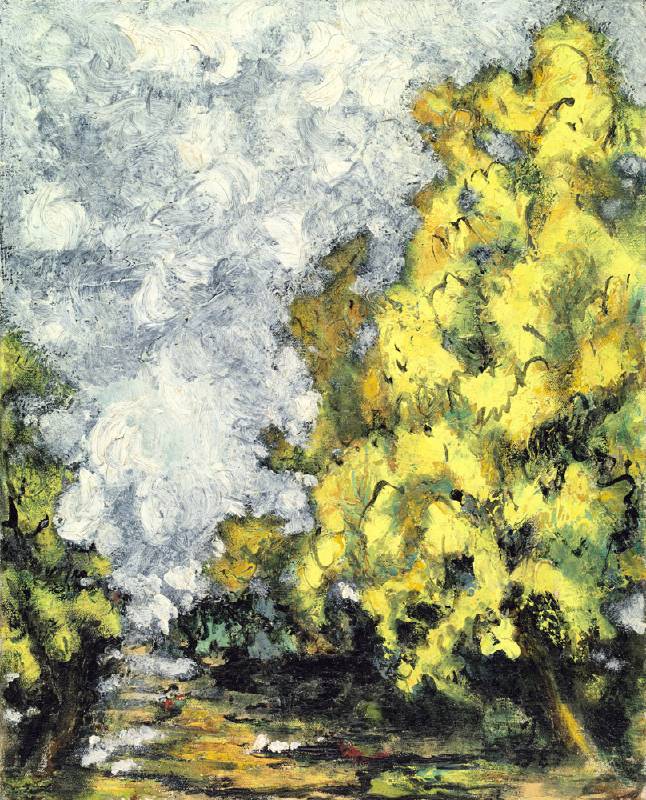 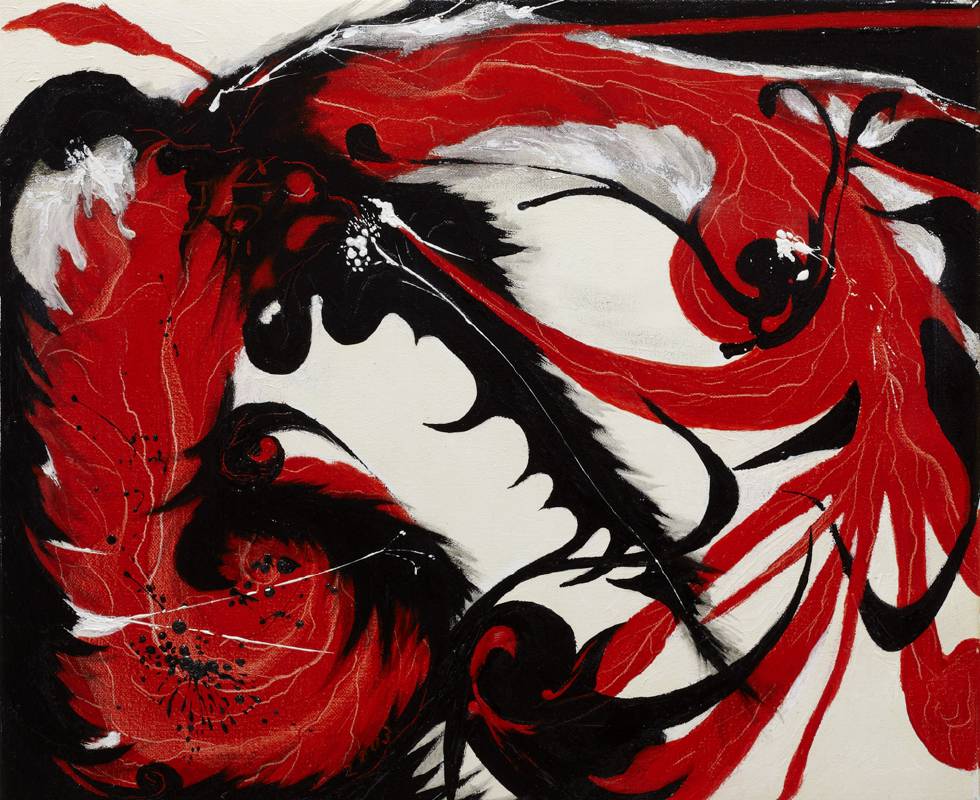 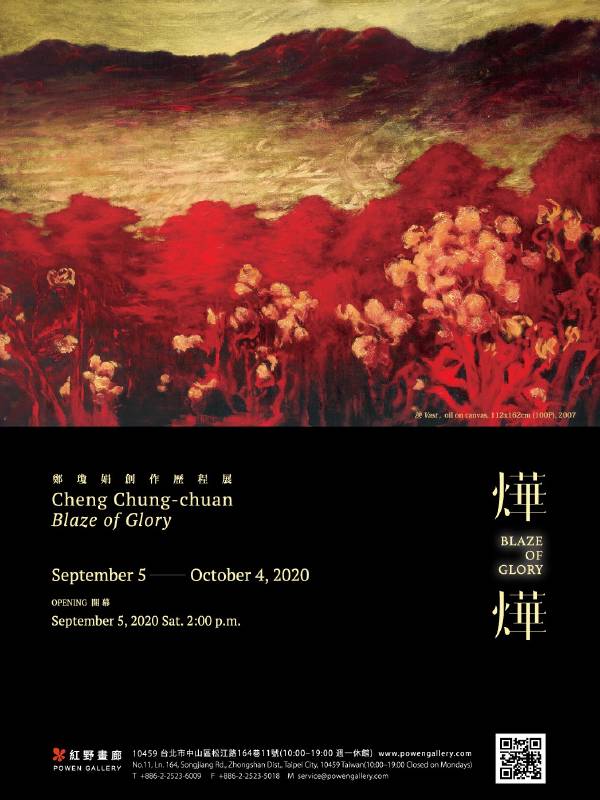 Cheng Chung-Chuan (b. 1931) started painting in the 1950s, which was during Taiwan’s art barren period, yet it was a golden period for Cheng. In her early years, Cheng took part in avant-garde and modernist movement. Later on, she went to Japan and embraced the life there. Despite the challenges of living in a foreign country, she persevered with her passion for painting. For the development of art in Taiwan, Cheng is said to be one of the very few outstanding female painters during that early period, and her skills were particularly precious in a time of limited resources. Cheng Chung-Chuan’s works expressed a spirit of warmth and serenity, waves of emotions specific to women, life’s complex sentiments and perplexities, and a yearning for the quest of life and ideals. The above sentiments and themes have been expressed freely in Cheng’s works since youth to this day.

Cheng Chung-Chuan came from a well-respected family in Hsinchu. Her father founded the Tung-Jen Hospital and was also a Hsinchu councilor. Her mother was the great-granddaughter of Li Xi-Jing, a literatus from the late Qing Dynasty. One can say that Cheng’s family was prominent and affluent. Cheng passed the entrance exam for the Fine Arts Department at National Taiwan Normal University in 1952 where she trained with professors such as Chu Teh-Chun, Liao Chi-Chun, Pu Hsin-Yu and many others. She also practiced sketching diligently in Lee Shih-Chiao’s studio, which set her off on the path of modern art. In 1957, Liao Chi-Chun the painter recommended Cheng Chung-Chuan and Chen Jing-Rong to join the Fifth Moon Group along with its founding members: Guo Dong-Rong, Liu Gong-Song, Li Fang-Zhi and Guo Yu-Lun. The group hosted its inaugural exhibition in Taipei Zhongshan Hall, and in the same year (1957), Cheng got married, subsequently moved to Tokyo and lived there with her husband for 30 years. At a point, Cheng halted painting for 10 years due to her family duties, her role as a wife and a mother including other reasons. That is to say, transiting from living a sheltered life as a painter full of ideals to moving overseas and wanting to pursue her art dream has come with great unexpected obstacles. The despair, helplessness, and loneliness her soul endured during that period must have been grave beyond words.

Cheng Chung-Chuan draws inspiration from nature for her art creation and manifests her imagination through a diverse interplay of plants, flowers, and art. She gives specific focus to the innate rhythm of visual elements and transforms her acute thinking onto the canvas. Her painting usually comprises of visual contrasting by painting golden yellow flowers in widely varied dissonance, through which the inner structure of nature and life unfolds consciously. Objects are depicted to be constantly evolving and generating; they move in a slowly pulsating space and take up a shape unconfined by form. We can view them as images for the soul that speak for nature. To grasp her steadfast sentiments requires exploration of metaphorical landscape that resides within her true self. Between the painter and the objects painted exist a certain delicate critique relationship. How to bring forth and express with a renewed visual vocabulary often depends on the painter’s character as a person and craft as an artist. Cheng Chun-Chuan’s painting is more than a re-presentation of nature depiction but a refinement and transcendence through objective interpretation. Her painting is a manifestation of released genuine emotions and disposition that are all encompassing.

In her early years, Cheng Chun-Chuan usually painted portraits as the motif, mostly with scenes of family life as the background featuring mothers, children, and her self-portraits. These paintings evidently reflect the subjects that she was most familiar with and explore the environments where women exist as multiple roles and identifications. The painter’s realm of imagination, ranging from vexing trivia for the mind to projections of vast universe, covers her daily life as well as cognitive musing. Extending mundane realities to consciousness of life imbued with artistic visions, Cheng expresses herself freely on the canvas with dancing movements of the brush and robust colors to bring forth her personal character of innocence and resilience through the depiction of objects and images, as is done so freely and unrestrictedly. The artist portrays elegant landscapes with oil painting where colors play a critical factor, and particularly, the spatial arrangement of shapes, colors and materials is the key element that draws in the viewer to appreciate the painting. In an interview, Cheng once mentioned her preference for warm colors, specifically red and yellow. An examination of her works will reveal that colors used in her painting are not presented with expected light and shadow, brightness and darkness. Rather, they are colors of emotions surging from the heart. In her painting, the golden yellow or brown colors of the earth, are not trite but ethereal, grounded and mellow, with an ambience of slight opulence. Viewed from the perspective of visual critiques, her works are permeated with an enduring charm full of vitality and vigor, yet approximating a harmonizing tone of consonance and serenity.

In the early 90s, Cheng Chun-Chuan decided to move back to Taiwan from Japan and continued to paint and intermittently launched new works. Subsequently, she started to receive attention from Taiwan’s art circle once again. Cheng painted to free herself from mental shackles, turning the sum of all her sorrow, injustice and anguish into graceful painting where she expresses her feelings and her positions. With her pulsating brush approach accompanied by a strong drive, Cheng expressed the floras’ will to survive and the species’ gentle yet relentless and ferocious traits. Cheng’s depiction of floras is as light as breezes and as enchanting as fairies, occasionally dancing against the wind or becoming elusive and opaque or suddenly coming into sight again. In her powerful brush movement exists a charged innate feminine strength. Cheng’s works of the recent years reveal, amid her rigorousness and reticence, a gradual release of passion that was previously subdued, going from concrete images to simplistic abstract pure colors. Cheng infuses single-color paintings with patterns and layers, heavy or light. Inspected closely, each painting rather demonstrates an expansive vision. Her maneuver of the brush in its retrieval and release has reached a supreme state of complete freedom aligned with the heart. In another word, the painter’s development will vary in style at different stages according to the age and psychological transformation. Viewing and reading the flora-like or non-flora-like shapes in Cheng’s oil painting is like seeing floras swirling in a vortex which often appear on the canvas by way of Cheng’s pulsating brush movements to form a signature mark of the artist. Further, various shapes of water stirred up under the steaming moving clouds and sky at dusk, or the stars, the sun and the moon, or the four seasons, are expressed in such an approach full of sentiments and clarity that is almost highlighting the object in a close-up shot. Such an approach exudes an imagery of floras ascending with smokes and clouds, and can be seen as the painter’s sharp and distinct visual vocabulary.

Cheng Chung-Chuan has built a new order of seeing with her staunch artistic belief. As a result, any unease and confusion in everyday life can then surpass the norm. Not only is painting the window to her soul through which Cheng Chung-Chuan meets the world, but it also comes across as a stream-like extensive monologue that will bring about a spiritual sense of eternal belonging and infinite ease. As one of Taiwan’s senior female painters, Cheng has crossed from the 20th century to the 21st century. Spanning over a long period of time, at nearly 90 years old, she resorts to painting as a way of seeing the world, and her works of visual imageries are rendered with sincere romantic sentiments and rich interpretative creations portraying a deep exploration of her personal life experiences while reflecting the development process of Taiwan’s female artists. Today we are pleased to see her creative energy continuing to thrive and expand in an ever more splendid manner.

【百年不時—陳漢聲個展】Chen Han Sheng: From view to landscape all at once