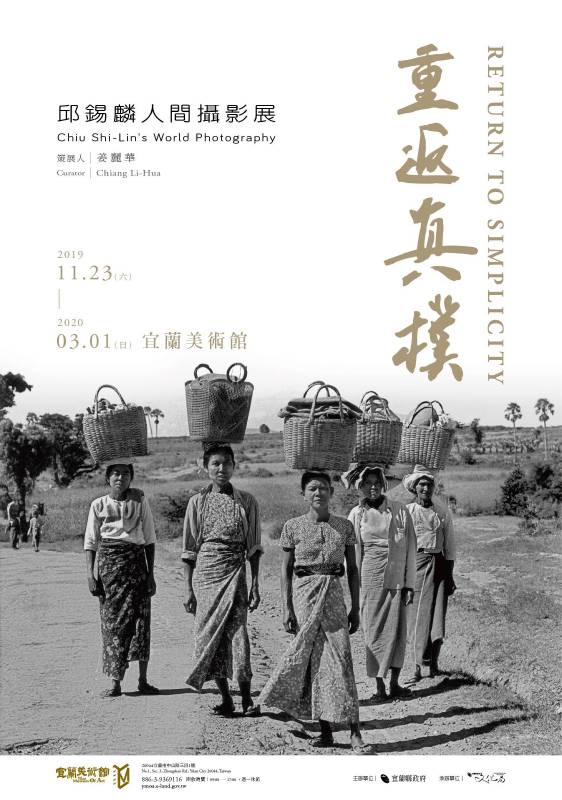 藉著它，我想記錄、歌頌並留存質樸人性的光輝美好品質，以及人與人、人與土地之間的和諧關係與情誼。——邱錫麟
Through the lens, I want to record, maintain and celebrate the glory of simple human nature, the harmonious relationship between people, and the love shared between men and the land. -- by CHIU Shi-lin

Chiu Shi-lin, born in Yilan in 1949, likes to listen to classical music and is knowledgeable about literature. He was a junior high school teacher of Chinese literature from 1972. He retired early in 1992 in order to focus on photography while he made no claim to be a photographer. Yet, full of passion for photography, he packed his camera and lens, and traveled to ancient countries such as Nepal, Myanmar, India, Tibet, and China. He captured scenes of folk culture and customs in places where materialism did not yet dominate life and societies untouched by heavy industrialism. His images are reflections of reality as well as precious records of history. In the past two decades, he has also photographed the beautiful coastline seascapes around Taiwan, expressing his praise of life through the beauty of nature. He has shared the broad vision of a seventy-year-old who “follows what his heart desire without transgressing what is right”. He has also focused on creating a visual testimony of the experiences of people with physical and mental disabilities. During his extensive travels throughout Taiwan, he made many visits to care centers for the mentally disabled or the visually-impaired. In addition to his amazing perseverance, his visual documentation of people and land also underlines his friendliness, compassion and esthetics.

Chiu Shi-lin believes that “simplicity” is a way of life, a state of mind, and a kind of wisdom. With a simple and straightforward approach to photography, he faithfully and truthfully records what he sees and hears in the world, expressing his care for people and the land through the images. The exhibition, “Return to Simplicity: Chiu Shi-Lin’s World Photography”, demonstrates his endeavor to capture the simple life among people through his lens. In portraits or groups photos, he recorded the local folk activities and religious practices, the households and labor of the ordinary people. Through the lens, he has celebrated and maintained the glory of simple human nature to reveal the harmonious relationship between people and the love and care shared between them and the land. For him, images are tools, like a language of expression. Through images, he can convey his feelings, his beliefs and expectations of people. Photography is also able to communicate his thoughts about human nature, social culture, and his literary philosophy and aesthetic experience.

Through the exhibition “Return to Simplicity: Chiu Shi-Lin’s World Photography”, organized by Yilan Museum of Art, we follow the path of Chiu’s long photography career and explore the pure and unpretentious mind of the people captured by aperture and shutter speed. The photographs are divided into four themes. First, in “Love in the World” Chiu Shi-Lin crossed borders to affectionately record the lives, culture and religious customs of four ancient countries. Second, in “Kindness in the World”, he documented, with honesty and kindness, the local life of Chinese culture and the simplicity of ordinary people. Third, in “Splendor in the World”, with a soul longing for beauty, he explored the diverse topography of Formosa Taiwan to create splendid coastal seascapes. Fourth, for the “Compassion in the World”, with unselective love embracing all mankind and the world, he visited schools of special education, schools for the visually impaired, and welfare centers for the blind throughout Taiwan. In image and text, he gave voice to underprivileged minorities to raise awareness about their plight and promote public acceptance and care.

Going through the photographs of “Return to Simplicity: Chiu Shi-Lin’s World Photography”, we look back at more than four decades of Chiu’s career. We feel his gentle character like a spring breeze. His view to life echoes the words of Jiang Xun: “a great adventure following the desire of one’s heart”. After his return from many one-man adventures, he now regards photography as his belief in life. Indeed, he has strong faith in photography, for to him photography is more than a visual experience, it is a medium open for reading, contemplating and appreciation. Throughout his life, he pursued photography as a language of expression, a means to visually articulate his thoughts and communicate with society. He sought out and praised the true and simple mind of human nature, and endeavored to end racial, religious, and social prejudice. Thus, his photographs have become an “Ode to Joy”, transcending nations and boundaries. The images are like a gentle light from ancient times that grows ever stronger in the viewers’ mind and finally inspire them to return to a life of simplicity.