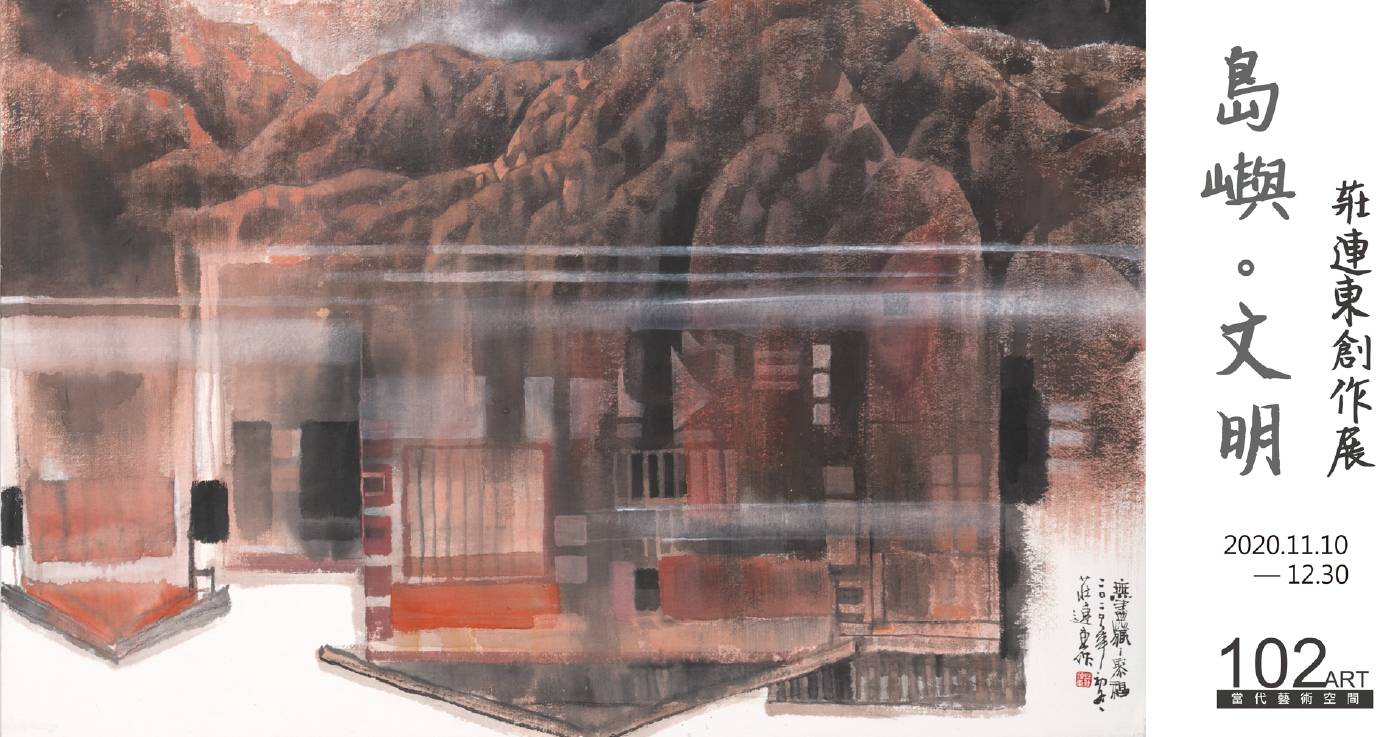 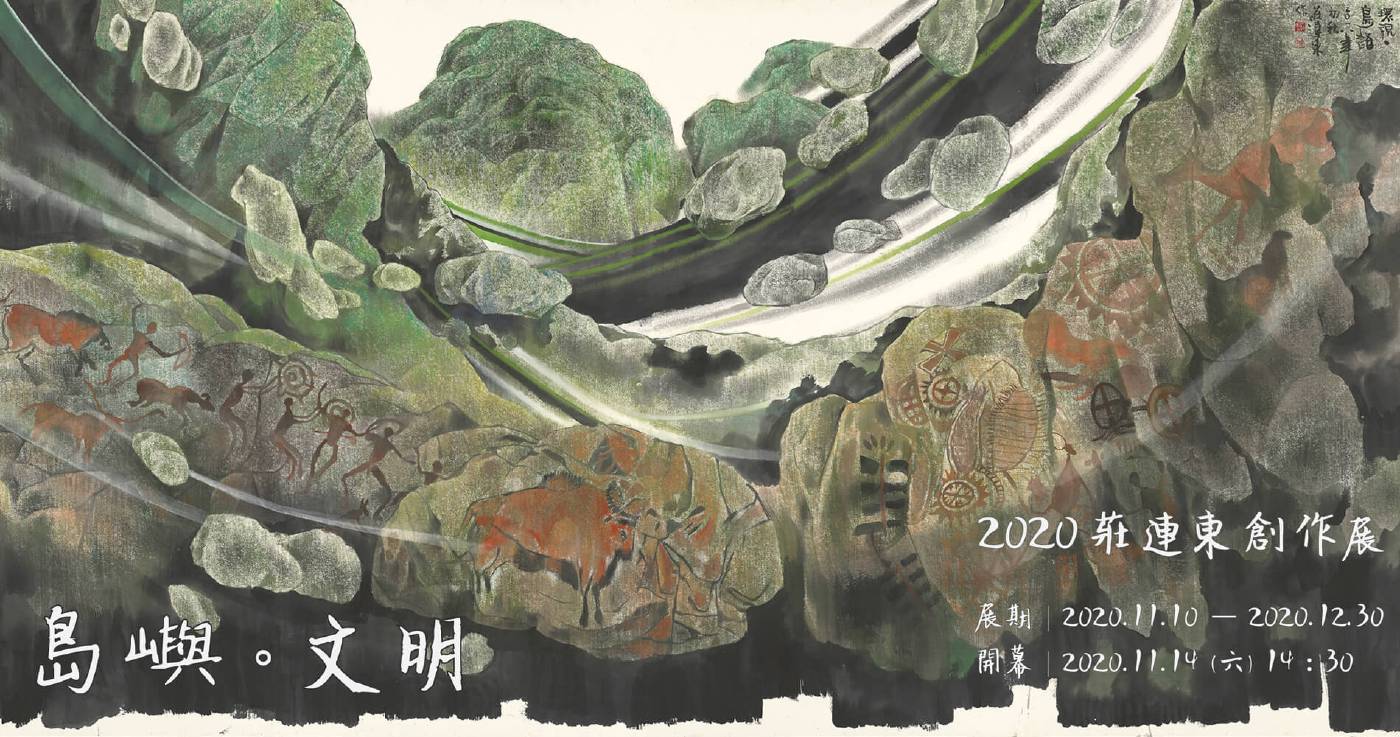 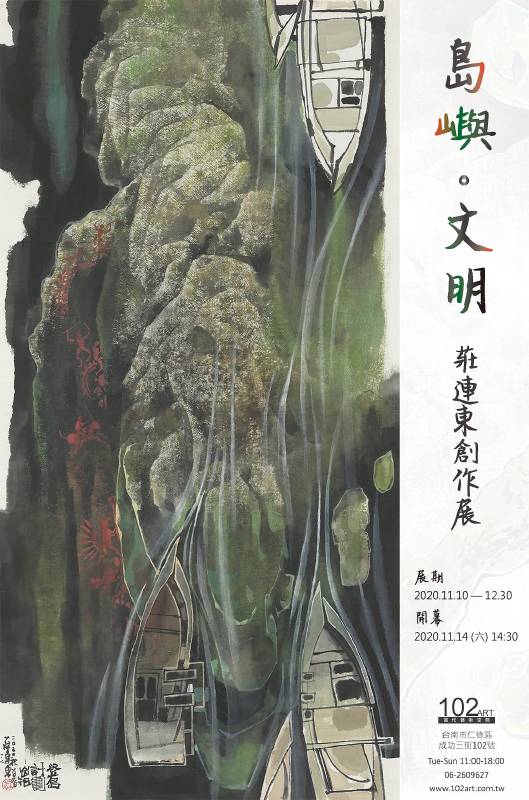 Islands and their stunning charm have been nurseries to countless civilizations and their majesty. Nurtured by age and history, every island is filled with incomparably abundant imaginations, being a medium that delivers histories and cultures. Through this artist’s deliberate observations and perspective, the mountains, rocks, forests and trees are faithfully painted, representing the scenery on islands; meanwhile the underwater realm provides the artist a place for wild, limitless fantasies. The conjunction of the two worlds creates the parallel between, the overlap and the unison of reality and fantasy, and thus brings forth the tenacious vitality of the island in depth and weight.

Hence—as a Taiwanese, contemporary ink painting artist who was brought up in the culture of an island—the present, the past, the future, the reality, the fantasy and the possibilities of islands have become Chuang Lain Dung’s latest creative themes. Through them he reflects on his own living environment, as well as tracing the historical context of Taiwan, the island country. By traveling to islands of diverse images around the world, he has comprehended the trails of progression to human civilization. He began this journey looking for distinctions, yet found a reoccurring truth; an outer pursuit has eventually lead to a personal, inner narrative. The realistic and the abstract images of island have provided Chuang a broad, independent space for creation and an outlet for emotional catharsis. Via shaping imagery of mountains and waters from the islands, which is interwoven with an image of human history’s progress, Chuang seems to be communicating the inseparable interdependent relation between life, the earth and history.

Chuang’s art is divided into several series. The first is about the correlations between an island and its architecture. This series considers the issue of age difference, which is presented by a variety of architecture styles. Be it a traditional Chinese palace with courtyard, religious temples, people's housing, or modern, urban skyscrapers—Chuang first faithfully captures the exterior appearance of its structure, then he removes the element of architecture and rearranges the picture into a new image. Hence architecture becomes a significant symbol to the transition in civilization in this series. The parallel connection between island and primitive signs is the second series, in which Chuang searches the symbolic, historical meanings of ancient symbols as the primal sources of island’s origin. He interposed his artistic perspectives into the entire value of human evolution, and thus all these symbols, without the distinction of being eastern or western, have collectively become a series of code narrated by the language of painting. The third series is about the symbolic relation between island and animals. By the fantastical fusion of crouching animals and the rocks of mountains, the fierceness, the tenacity, and the force of animals are together represented as an analogy to the liveliness of island. The fourth series is the interdependent relation between the distinct islands, which, mainly deal with his contemplation about the shaping of island by time, space and distinction. And the basis of this series of contemplations is the different look of the same place, formed by the different perspectives of looking at the islands. Thus these four series demonstrate the diverse, ineffable charm of island with a variety of distinct aesthetics.

During this refreshing, late autumn day, Chuang Lain Dung’s latest works in 2020 will debut at 102Art Gallery, Tainan. We sincerely invite everyone who is an art enthusiast to participate in this event.