【一池光井蘇笑柏畫展 The Paintings of Su Xiaobai】 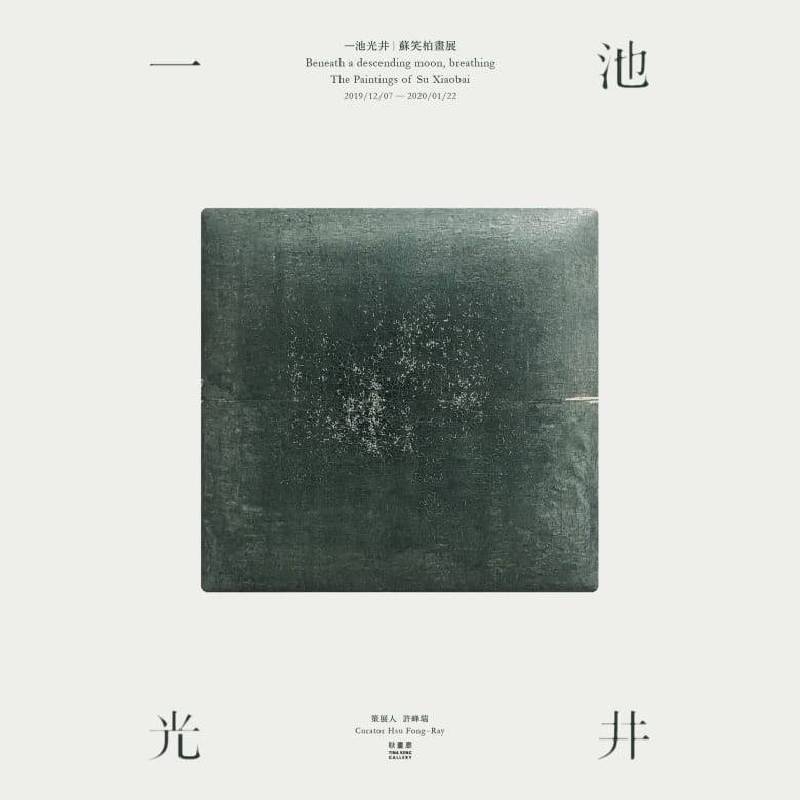 Leave the narrative to whoever wants a narrative. All I ask for is a little light. — Su Xiaobai

We read Su Xiaobai’s stories, admire his paintings and scrutinize his lacquer, all of which have been featured extensively in the media. Yet to him, a single remark serves to conclude these overflowing narratives: “Leave the narrative to whoever wants a narrative. All I ask for is a little light.” The exhibition Beneath a descending moon, breathing: The Paintings of Su Xiaobai has no intention to extend the narrative, or to title it. It is, simply, a curator’s response to the artist’s work.

522 Appearance
At the entrance to his studio, we put two chairs together and tried to get to know each other, as if we were online friends meeting for the very first time. “How is it that I don’t really know much about you, given how long you’ve worked at the gallery,” Su said. “I’ve heard others mention you of course, but this is the first time we’ve actually worked together on an exhibition.” Just like most artists and curators first discuss works, our ideas collided in chemistry, and time seemed to have frozen. We talked and lost all sense of time, until the natural light faded and dusk blanketed the studio. The growing darkness obscured his face, which morphed into a dim silhouette. And it was then that I could finally see the true artist.

523 Light Well
The artist prefers not to have the lights on in his studio, and works only when there is abundant sunlight. There is an electrically controlled curtain installed on the ceiling of his studio, and as it drew open, rays of sunlight spilled onto the ground illuminating his works, highlighting their shapes and textures. The artist was searching for a particular painting among paintings that seemed to both look alike and unalike. There it was — on this afternoon when the studio moved in and out of brilliance, lighted by a fickle sun that sometimes flung its broad beams through the light well or furtively dimmed, throwing the studio into shadows — the painting seemed to emerge under the light well yet slowly descended into darkness as twilight fell. Perhaps that was the one.

524 Traces
The studio is the primary field of discovery of an artist’s production. I am a ghost drifting across the space, picking up the traces of all that has happened here. Pieces of wire mesh, a wooden carpenter’s square, a two-foot-long handmade measuring compass, roller chains, metal pieces. These physical objects mottled in paint must somehow be associated with the marks on the paintings. A canvas coated last night with pastel pink lacquer is now half dry. I remember it as a thick layer of color, but now a light shade of blue that had been applied before the pink discreetly surfaces. The clues of the painting are concealed by time; the light of the painting is concealed within its vestiges.

525 Jade and Stone
On this scorching afternoon, we are watering the bamboos with hoses in the back garden. The small stones I saw scattered on various worktables in the studio turn out to be rain flower pebbles that originally came from this bamboo garden. This reminds me of the books about the Hemudu culture, jade, pottery, stele, and a book titled Ikonen piled on the studio desk. Staring at the rain flower pebbles cupped in my hand, I had an epiphany about the indescribable emotions that are expressed in his work. The inexplicable has been revealed, right in front of my eyes, plain and simple.

526 Embryo
The substrate, before being covered in ash and lacquer, is the starting point of his work and, after this visit, the beginning of an exhibition. Make it the central piece then. The handmade invitation cards echo the way the artist creates colors layer by layer; they seem linked in spirit to his paintings, in the thickness of their layers, in the traces left behind after production, in the way each of them is almost identical but distinctive. One, the work of an artist; the other, the work of an exhibition.

Born in 1949 in Wuhan, China, Su Xiaobai lives and works in Shanghai and Düsseldorf. A graduate from the Düsseldorf Academy of Fine Arts in Germany, and a member of the Association of Dusseldorf Artists 1844 (Verein der Düsseldorfer Künstler 1844), he has developed a visual language rich in personal experience and abstraction under the guidance of Konrad Klapheck, Gerhard Richter, and Markus Lupertz, by breaking away from the skills mastered in Beijing.

Immersion in Western culture and separation from his homeland led Su Xiaobai to rediscover the duality between art and object, and renewed his perspective towards the traditional culture of his ancestry. Su became inspired by lacquer — a thousand-year-old plant material and a symbol of Oriental culture — upon his return to China in 2002. He began experimenting lacquer on linen, bricks, sackcloth, clay, vine, and wood as a substitute for oil on canvas. The artist paints layers of vibrantly colored lacquer in a structural and balanced composition, rendering a three-dimensional momentum. The seemingly arbitrary, yet meticulously deliberate handling of visual forms reveals the artist’s pursuit of aesthetics and his personal sense of reinvention.