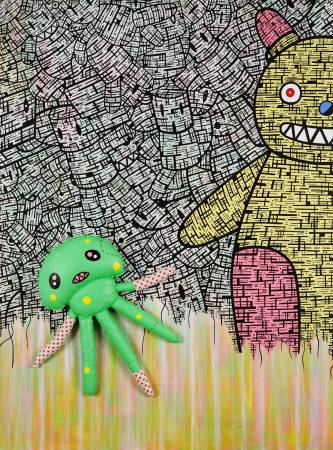 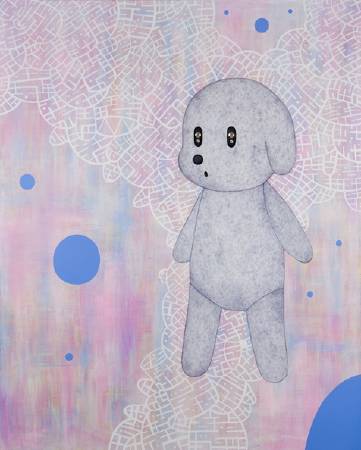 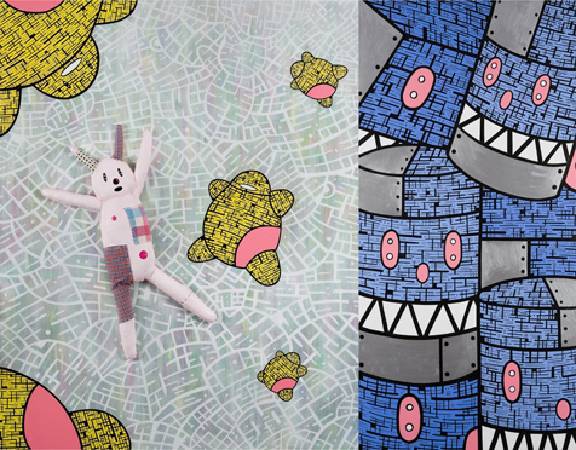 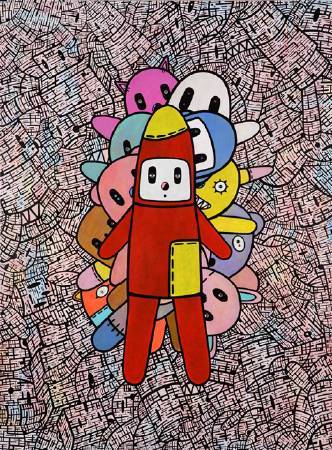 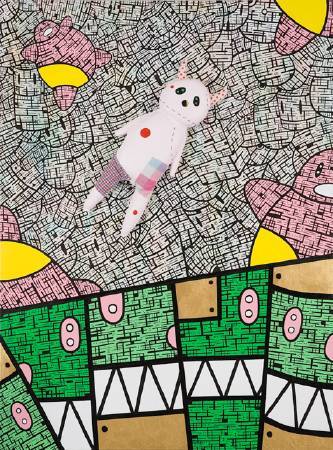 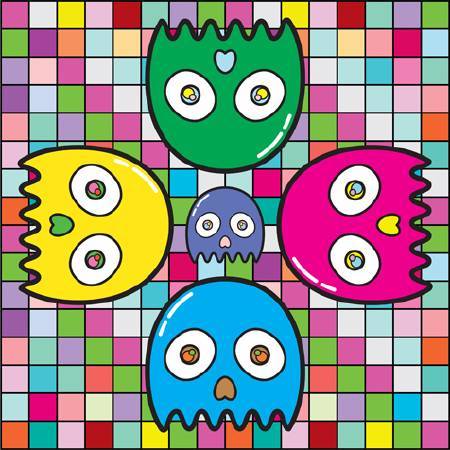 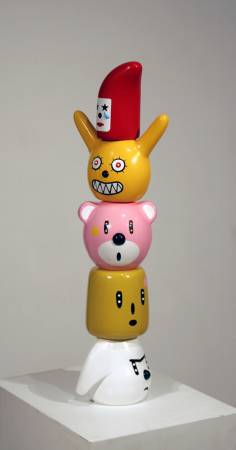 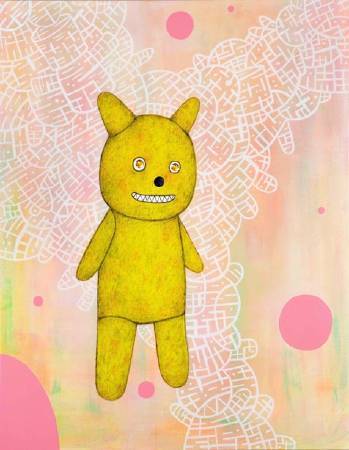 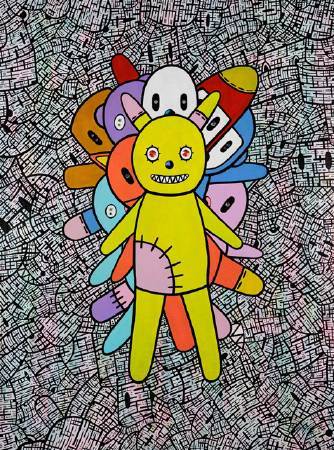 Encountered Eddie Kang was a kind of accidental fortune by chance. I met a female artist at the hotel through the arrangement of Sunhee Kim, a famous Korean curator, and happened to meet Eddie Kang there, a sunshine boy with full confidence, just coming back in Seoul from U.S then. His mother Kim, Hyo-Jung is an artist as well, and we promised to visit their shared studio thus.

In a building, not a large space, displayed mostly Eddie’s works. The main material of his paintings was mixed media and some of them were added his hand-made dolls. The contents looked fun and childlike but really involved the profound implications. This way was different from the common styles in Korea at the time. At the age of fifteen, Eddie left his hometown to U.S. for study so he can speak fluent English. To study abroad was his inner wish and which had been rooting in his very young heart.

Eddie’s father is a dentist who loves reading and archaeology; ever dreamed to explore and travel in every place just like Indiana Jones. His father’s erudition and liberality has laid the foundations of Eddie’s childhood family education and knowledge structure. Eddie’s mother, just like the Korean traditional female got married and then took care of her husband and sons. She settled a studio at a house corner right after Eddie and his younger brother went to the kindergarten; picked up her paint brushes again and taught her two sons to paint at her spare time from creating. The source of Eddie Kang’s affinity to art is from her mother for that reason.

It’s true to say Eddie grew up from the studio and this was his destiny also. Therefore, his little mind was preparing well to be an artist as soon as he became a grown-up. He was determined to study overseas and travel all over to become a famous international artist. Thus, at his fifteen, through his parents’ arrangement, Eddie set off alone to America to attend Boarding School. Due to his excellent results in high school, Eddie entered Rhode Island School of Design as his wish and took Video and Film art as his major.

For Eddie was a young overseas student, not serving in the military yet, he was back to do substitute service for two and a half years after graduating from the university, and meantime he was pondering his future. During 2004 and 2005, Eddie was awarded prizes frequently for his MTV-filming. His family originally hoped he would make commercial movies in film industry or went into designing. However, he knew very clearly in mind that he was more in love with fine art creation. In 2006, Eddie formally told his parents his decision to be an artist instead of going in employment. He was allowed to try one or two years to see if he could make a living by art or not, and then his parents could get back to discuss his future accordingly.

Living abroad all alone while he was very young, Eddie has developed his independent thinking already. Not only did he have multi-aspect capacities for management and organization in doing multimedia creation, but had many representations in running a business. He knew and invested stocks in his university period. After finishing the education, he used the concept of individual production to invest in operating bars by European individual brand mark as well as importing wine career. As a result, Eddie has settled well the economic base for him to do art creation at ease during his full-time creating. Being an initiator with both sense and sensibility, to pursue outstanding seems to be Eddie’s motive power that keeps him never burn out.

As Eddie’s father had a fondness for comic books, animations and cartoons were easy for Eddie to get in his growing days. And those became his most familiar element in his surroundings where he couldn’t escape at all times. The expression of his creation is just the preference of his generation for visional form and also their most familiar appreciation aspect. Under the naïve and innocent appearance, his creation actually contains their sweetness, bitterness, happiness, sadness and their feeling and reaction in every life status. It’s not just a simple fun and pleasure rendered.

Painting mode is the most important characteristic in Eddie Kang’s works. Colors, lines, texture and the quality of the painting surface are all his pursuit steadily for excellence. Even in his sculpture works, the surface layer is also the painting result of elaborate picturing. This demand of “never being slack” for painting quality is absolutely influenced by his mother. She is skilled in handling the subtle texture in her semi-objective paintings. Influenced imperceptibly by his mother from his childhood, Eddie develops his self-discipline more scrupulously. He puts in great effort to take care of the background of the characters so that the motif and the background could achieve equal-standard completion. And this was often ignored by general artists. Perfect-requesting mind reflects particularly on his sculpture works as well. Eddie absolutely can’t stand the effect of others’ replacement, so all the details have to get started by himself. Under certain assistants’ help, he finishes every single piece of works to the best. Therefore, he only wants to create at most two or three editions sculptures. The reason is that his sculpture is just like his painting. Every piece has its complete content and characteristic as well as his projective feelings wholeheartedly. Indeed, each creation is hard to make a copy.
Eddie’s creation is a process of continual story telling. The story has both character setting and content script. He uses various virtual characters to depict diverse tastes of urban life and this process is just like he is making an animation film. So far, he has developed the characters--a dog” Loveless”, a voodoo baby” Voo”, a doll ”Rag’, a yellow rabbit with sharp teeth “Cabbit”, a white rabbit “ Moony”, a pink bear “Bubble”, a purple bear “Polar”, a weird bear “Oni-B”, a clown “Storyteller”, a robot “Force”, a balloon “Reckless”, a cat “Loss”, a panda “Pams”, a jellyfish “Jelly” and a monkey named “Eddie”, who in fact projects himself.

In Eddie’s paintings and sculptures, these interesting characters arrange and combine to act out every kind of life episode. Moreover, there will be more new characters joining constantly in the new cast of derivational story. Then, it seems to be an endless and ever-changing life theater; be the infinite imagination towards unpredictable future. All kinds of designed characters look like toy dolls, but they actually have humanlike emotion expressions if we look at them carefully. All the expressions of delight, anger, sorrow, joy, gloom and fear can’t be comprehended in a doll’s world. Eddie metaphors helpless passivity in life with personified dolls who think they are living a master-like life, but in reality they are besieged, involved and hindered everywhere. It’s usually a fact of life that they can’t live independently.

His latest creation is “Karma” series in which the dolls are arranged in line as if they are rehearsing the dance of thousand hands Bodisattva. He uses the feature of lenticular print in the work “Life is like an intense game” so that we can see the changes of the images from different angles. It seems that Eddie gradually goes back to his early animation creation period and to develop animamix aesthetics is his goal of next stage.


Young but clever, Eddie Kang knows the resource integration. Being an interdisciplinary operator, he always does his best to reach the highest quality control in each kind of fields. Lately, the clothing series that he cooperates with Korean textile brand “KOLON” is about to enter the market. From 2007, Eddie rises from art field to omni-directional development and following Takashi Murakami becomes a representative artist of new all-round creators in 80’s. In addition, Eddie Kang is my important example of doing Animamix research as well.